DAVID WARES - A Life in a Day Part Two 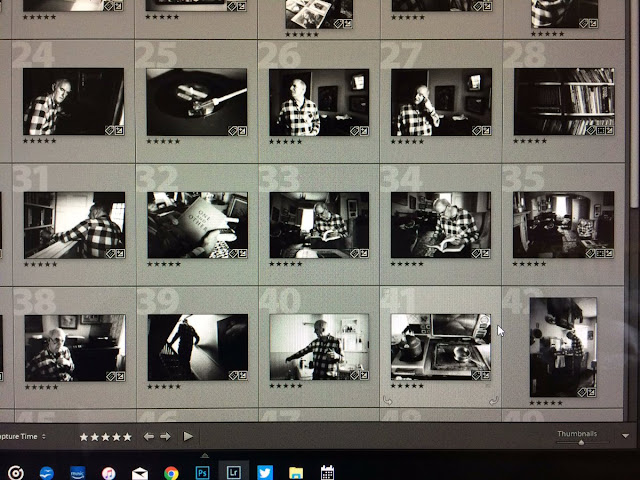 Woke up, fell out of bed. did not drag a comb across my head - haven't done for a while. But I did find my way downstairs dressed and ready for the day, the day in which I would be talking to Dave about my life.

I walked over to Waitrose and bought some soup for lunch and at about 10.30am, Dave called me from his car and I limped up the road to give him a Visitor's parking permit and we walked back down the house together pausing to say goodbye to Jane who was off to her studio for a day's painting. As I walked into the hall, I turned back to him and 'click', Dave got the ball rolling with the first photograph of the day.

We had a coffee and chatted about how the day would go - he would continue to take shots on one camera without me posing - click - and with his other camera he would film sections when I would talk about my life in relation to books and records - click - it was at this point that he told me that he had written to the other photographers with whom he had exhibited last October at the "Over Hills and Seas" show which was part of the Brighton Photo Fringe. He told them what we had planned and asked them to send him questions which he would put to me in the course of the day. I was very touched that he had done this and very touched also that eight photographers had responded - click.

I think we started off in the study and this prompted memories of Farley Farm, the former home of Lee Miller - click- the day moved comfortably on as we talked about various subjects and how we would present the film and the stills. I got a bit tearful a couple of times but only over silly little things.

We ended up looking at some of my films together - click - and that was it. An easy day spent with a very nice man, Dave Wares, a thoughtful, considerate and good-humoured companion and a fine photographer.

Then I sat down and read the news until Jane came home .

Postscript : When I sent a draft of this post to Dave to approve as I do with most of my shoots, he asked me if I had a particular favourite image I would like to place at the end. However, the idea of this project, "And Far Away" is not to choose one favourite image but to examine the emotional and intellectual connection with the photographer. Amen. 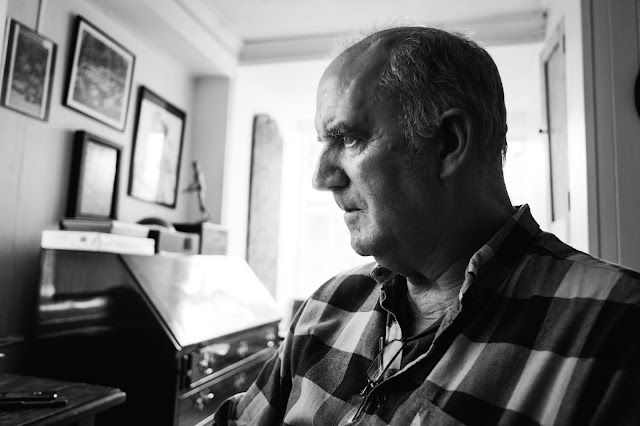