Yesterday, I spent about five hours being photographed by Nhung Dang and it was an absolute pleasure. Nhung had visited me in Brighton in January of this year to chat about the proposed shoot and we got on really well and agreed to go ahead in the Spring but one or two problems arose and so it wasn't until yesterday that we went ahead finally. And it was fun!

I had come across Nhung's work in December 2014 and thought it was astonishing and I was taken particularly by the statement on her website that narratives in her work were often influenced by her own personal feelings of melancholy and yearning. She left Vietnam as a refugee with her parents and brother when very young but she has since achieved success as a photographic artist and has recently completed a course in Psychotherapeutic Counselling.

Our shoot was all on film although her Hasselblad jammed but she carried on with her 35 mm SLR as well as a delightful little pinhole camera - I couldn't remember ever being photographed with a pinhole camera before. Unfortunately, the light was not good enough to produce a decent image on the pinhole shots apart from those in the garden which are interesting. 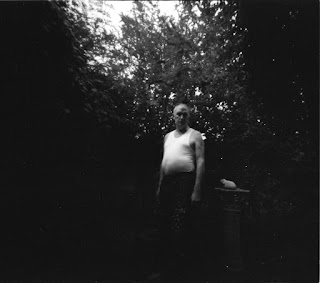 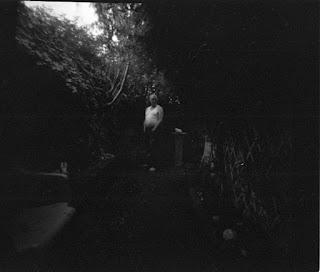 Nhung likes to tell stories in her work and so she took me to various parts of our house and garden and questioned me very gently about how I felt there, wearing the clothes I wore - I changed clothes three times during the shoot. We started in the garden first where I wore my paint-splattered jeans and a  white vest and then moved into the kitchen where I lay down on the floor as I do sometimes to sleep and I slept only to be woken by the click of the shutter. I had bought a coat, a rather flamboyant coat for me, when I last saw Nhung and told her that I needed a bit of courage to wear it and so she suggested that I put it on for the shots in our sitting room - she asked how I felt wearing this coat and all I could think was... flamboyant. She then asked me to close my eyes and breathe in and out and she repeated her question and as, I sat there I felt brave and ready and, after a while, she asked me to look at her and I felt my eyes blaze with daring and derring-do as I opened them and stared down the lens. We ended the shoot in my suit (not both of us, just me) in my study (both of us) for a more formal set of photographs.

In the middle somewhere, we had a break for lunch and I made scrambled egg on toast and we talked about families and friends and, as for the latter, I felt that I had found a new friend and this was confirmed when Nhung asked for a hug as we said goodbye at the front door.