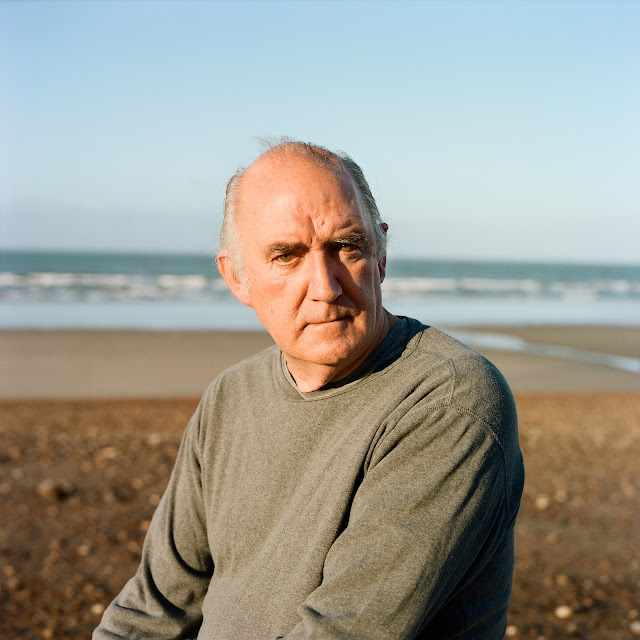 The colours were beautiful that morning. It was 6am and the sun was low and painted everything with a golden tinge - the sea, the sand, the pebbles, the rusted corregated metal fences attached to the aging wooden breakwaters. Mecaella and I clambered down onto the beach and parked next to one of the large grey boulders which were waiting for us to lie on.

We looked at each other and had the same thought. Let's start with some portraits. This must have been one of the first shots taken and it is one of the best. We were both relaxed and I looked deep into the lens. I really wanted Mecaella to feel my presence, to know that I was giving all of myself to this shoot. She has, in turn, captured beautifully the contrasting colours - the grey of my T shirt, the pale blue sky, the darker blue of the sea, the differing browns of the beach, the pebbles lit by the sun, the creamy palour of my skin, even the green of my eyes. 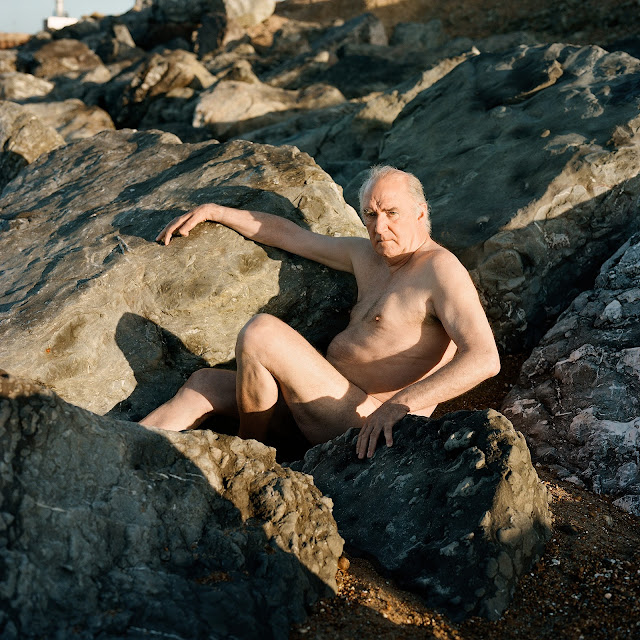 The shapes of the boulders looked inviting and I removed my clothes and sat amongst them uneasily. The camera has caught my feeling of awkwardness or maybe it is a vulnerability? Whatever the suggestion, the actuality of the light and shade and the angles of the shadows, my naked limbs and the rocks serve to create a mix of emotions. We were getting closer to the eroticism of shapes and textures that we had talked about in recent days.

Then, I lay on the most inviting rock facedown to produce the shot below. 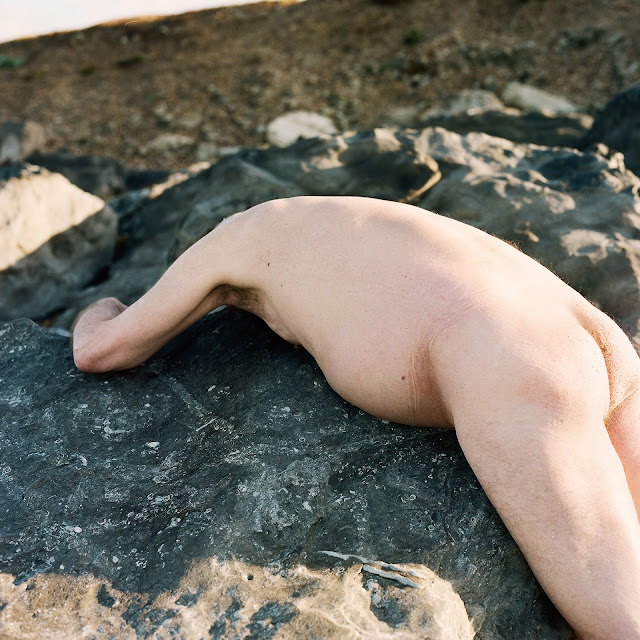 My vanity flinched when I first saw this but time has passed and I look at it with different eyes now. The body made flesh by the sun has a wonderful tone and, although it may not be everyone's idea of erotica, there is a beautiful sensuousness in seeing soft flesh laid out on the hardness of the rock. Somehow the lines of the elastic of my shorts pressed on my waist add a sexual element - very small and unintentional but it is there. 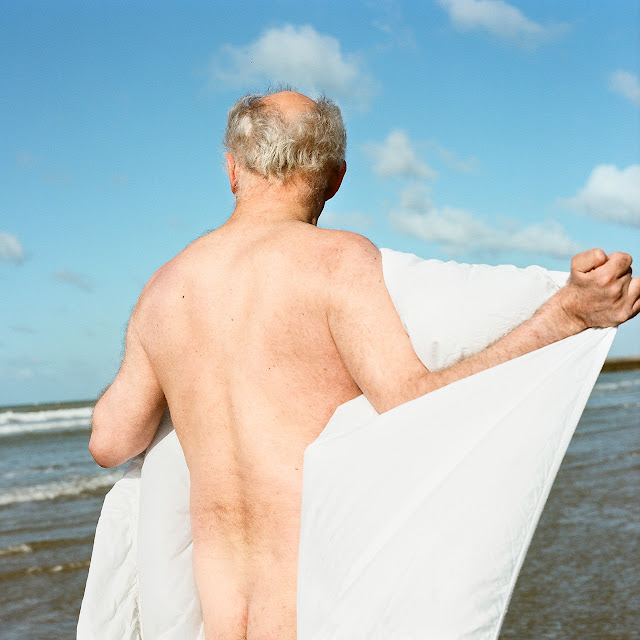 However, the calmness and warm glow permeating from this shot might suggest otherwise. Again, there is so much in this image that works. The contrasting  textures and hues, the purity of the white sheet, the fragility of my right hand decimated by Polio over 60 years go, all set against the gorgeous blue of the sky. Mecaella had some nerve that day which allied to her obvious talent has produced an excellent collection of images.

So, did we examine SEA - Sexuality, Eroticism and Attractiveness? Possibly. But all good photographers adapt to the situation and Mecaella Vasconcelos is good. She is very good.


“Life is what happens when you are busy making other plans"
- from "Beautiful Boy by John Lennon.

Mecaella Vasconcelos and SEA - Part One

What do these words mean?  There was a moment when Mecaella and I stood facing each other and looked each other straight in the eye and they had no relevance to how we both felt. This was a connection between two human beings of different genders and widely different ages that spoke of our mutual love of photography and our willingness to give ourselves to the moment. Mecaella squeezed the shutter release and click, the photograph and that connection were preserved for ever.

I have Carol Morgan of Middlesex University to thank for bringing my notice to Macaella's wonderful work when she sent me "Lucid", the magazine showcasing the work of the BA students who graduated from Middlesex this year. The university has consistently produced photographers of the highest calibre and Mecaella is undoubtedly one of them. Not surprising when one is aware that the great photographer Steven Barritt was her personal tutor. Steven photographed me in his last year as a student there in 2011 as part of "Over the Hill" (https://timandrewsoverthehill.blogspot.com/2011/02/anachronism-by-steven-barritt.html)

In "Lucid" I read first the conversation between Mecaella and her fellow student Ross Boulton and immediately, I empathised with their views on the vulnerability of photographers expressing themselves even if they weren't the subject of the photograph. I enjoy expressing myself through the photographs other people take of me and often I feel an instant fellowship of two - me and the photographer - we are both putting ourselves on the line.

There then followed a question by Ross to Mecaella which resulted in a discussion concerning Sexuality, Eroticism and Attractiveness. This interested me because of what seems to me be the constant categorising of nudity as sexual or exhibitionist or weird and the perception of some commentators that l have been photographed nude so many times whereas the percentage is about 25% of the total.

Anyway, l wrote to her asking if she would like to collaborate with me and I received a very swift
and positive reply. We arranged a chat on Zoom and got on very well.  In our subsequent email correspondence we agreed that Mecaella would come to Brighton early in the morning to photograph me. And so she did and, although I posed nude in a number of shots, they were not sexual. Nor did I feel erotic although at one point I laid on the sand warmed by the sun and looked up into the deep blue of the sky and it felt sensual. I did feel a connection with Mecaella as she joined a long line of great photographic artists with whom I have worked over the last 13 years.

We returned to the house, said hi to Jane before she left for her studio and then looked at some photographs and films from a few of my exhibitions before we finished off with some simple portraits. We had fun, innocent fun, uncluttered by deep discussions of SEA. She spoke very fondly of her partner, Dan, and of her family, a mix of Polish and Portugese. I told her of my relationship with Jane and my children. I recounted stories of previous shoots, the significance of Lee Miller and my writing. She went into town while I slept, first at the keyboard and then on the floor. Then she came back, gathered her things and set off for the station.

As the song goes - it's over now and I have had my fun and what fun it has been and what a note to end on.

AND FAR AWAY : A Continuing Journey

From. 2007 to 2016, I was photographed by 425 photographers. Some of them photographed me more than once. Between them, they took thousands of photographs in different styles, using different camera and ideas and concepts. I called this project "Over the Hill". I did not have one bad experience. I could have gone on and, as Rankin said, go for the 500 but I felt that there had to be an end point - I wanted to put it all into a box, tie it up with ribbon and put it on the shelf and, every so often, take it down and marvel at all the wonderful people I had met and experiences I had had and places I had been.

However, I did not want to stop seeing these guys but I wanted to try a different approach which was not all about numbers and choosing one image from each shoot. I wanted to go further (whatever that meant). So, I continued approaching photographers but with a view to examining the whole shoot and also the intellectual and emotional connection with the photographer. So began "And Far Away"......
Posted by Tim Andrews at 01:31 No comments: 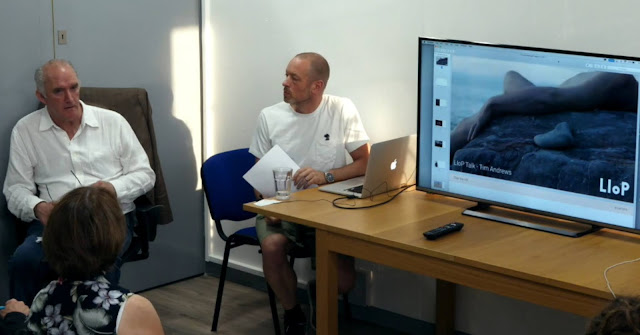 In the summer of 2019 when we used to walk about freely without being troubled by the threat of a pandemic, I received a message on my blog from the photographer, Caterana Tonne Fleur, on behalf of the London Institute of Photography (LIOP), asking if I might be interested in speaking about my projects, "Over the Hill" and "...And Far Away" at the LIOP in London. I confirmed that I would and entered into correspondence with Debbie Castro and then Holger Pooten as we planned how the talk would proceed.

I felt that I would be much more relaxed and spontaneous if, rather standing up and talking, I answered questions. So, borrowing an idea from Dave Wares who has photographed and filmed me both as part of "Over the Hill" and "...And Far Away", I chose a few photographers whose photograph of me I would show at the talk and I asked each of them to send in a question which I would answer as their picture was shown. This did not quite go as planned and this was completely my fault as I don't think I made that part of the programme clear. It wasn't helped by the fact that the name of the photographer was not shown when his or her photograph was displayed. Holger apologised for this but I should have taken control and said the name as the picture came up on the screen. I did partly redeem the situation later when I spoke in more detail about some of the photographs and mentioned the photographer by name.

However, this was a small blip in the general enjoyment of the evening felt by me and, as far as I could see, the audience's enjoyment was not in any way adversely affected. Holger's own questions were interesting and incisive and I loved some of the photographers' questions, especially this one asked by Lenka Rayn H:-

“You have often shared in your blog not just how the photographs were taken, but also the experiences and memories from the day spent with people that you have often not previously met before.
If you had to choose between only having the memories from the day or only be left with the photographs that were taken, but have no recollection of the day which would you choose?
The experiences or the images?”

You will find the answer in the film of the event the link to which is -  https://liop.co.uk/talks/tim-andrews-over-the-hill-and-far-away/

We managed to squeeze in my Zorro film, "Todo!" and the event ended with a few questions from the audience which included one of my photographers, the delightful Thea Lovering.

The evening ended with a jolly, chatty drink outside with Colleen Rowe Harvey.

So, a very interesting experience for me and also, I hope for the audience. I am just the model. Generally, I sit, stand, run, climb, crouch and bend and do what I'm told - the real artists, the real stars of the show are the photographers. I am very grateful to the LIOP for inviting me to speak and, in particular to Caterana, Holger and Debbie for their kindness, courtesy and hospitality. The London Institute of Photography is a great organisation - look them up!